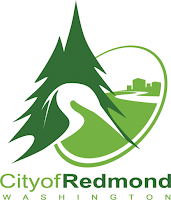 In the October 1st Council Committee meeting some exciting news was reviewed about two large-scale Overlake Village art projects in the vicinity of 152nd Ave. NE.

Gateway "wall art" is planned for the corner of 152nd Ave. NE and 124th Street S.to welcome travelers coming to Redmond by light rail. Council member David Carson (running for re-election) recommended focusing the art on the north wall to greet the incoming light rail travelers. Parks Committee Chair Councilmember Hank Myers (also running for re-election) was concerned  the current SW and NW walls would be cut into existing properties, like Goodwill. He was re-assured the walls would remain at the same level, that it was more of a Department of Transpiration issue, not affecting art. Staff assured council the art wall will be small and fit well with the landscape design.

The Bike/Pedestrian SR520 Bike/Ped bridge to Microsoft has exciting large scale art in the design stage. It's a square tunnel decorated with tiles made, by a robot. with rainbow colors arched over the tunnel and two rows of palm trees leading up to the tunnel. Staff coined it "a celebration of the LGBPQ community." Staff assured Mr. Myers and Mr. Margeson tagging with graffiti wouldn't be a problem.

I was put off staff labeled and pigeonholed this art as they did. Personally, it made me feel happy like I was heading off from our dreary weather to a vacation in Florida. Council President Angela Birney (running for Mayor) thought it was cool too.  Councilmember Steve Fields asked what inspired the City to install it as is?  He referenced his knowledge of art in Santa Clara.

Hank Meyers said he has a lesbian daughter but Redmond had many other cultural opportunities; that LGBPQ didn't represent our greater community.  Staff answered that Redmond already has a diversity of art! Can you believe it?!  He and Councilmember Steve Fields (running for mayor ) were disappointed by the poor public notice, saying community feedback was insufficient. I agree! Staff responded with a very weak response, referencing: an arts commission review, a 2013 "public process,"  a 2015 survey and a hearing in 2014.

The total budget for this public art project is $180,000, including a one percent allocation from the project. As usual, Steve Fields brought up the budget. $90,000 was spent on the tiles through a $32,000 grant and the general fund bringing the city over-budget. Councilmember Hank Margeson (running for council) said adjustments to the general fund weren't unusual. He appeared to be the go-to man for knowledge on city finances.