At first I thought it must be a log or a piece of driftwood.  However, as I drew closer to it, I could see that it was actually a large dead Chinook salmon – indeed, one of the biggest I have ever seen.  It had likely been on its way back to breed at the Issaquah Hatchery, when it somehow met its demise.
It was clearly a male, as evidenced by the noticeable ‘kype’ located at the tip of the lower jaw.  This is a hook-like secondary sex characteristic which develops in some male salmonids prior to the spawning season.  I estimated its size as about three feet in length. 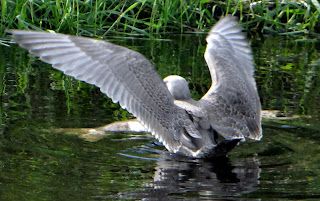 As I drew closer, I noticed a couple of gulls circling overhead. One landed in the water and swam over to the salmon.  After inspecting it for a few moments, it sank its beak deep into the eye socket area, as I snapped off a few photos.
The gull appeared to me to be an immature glaucous-winged gull.  This species is very common in our area and takes four years to become an adult.  In the immature phase, the feather coloration is an admixture of cream-colored white and a mottled tan, with a black beak.

The gull continued to paddle along beside the salmon and occasionally peck at it.  After observing the two for a while longer, I finally decided to continue on my way, leaving nature to take its inevitable course.