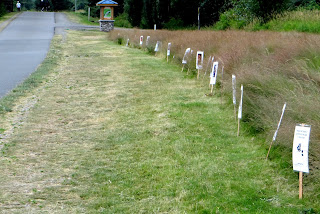 On Thursday July 9th, I went for a walk along the Sammamish River Trail here in Redmond.

I was surprised to discover that some individual or group had organized a display of a series of
photographs of African Americans who have been killed by police during the past few years here in the USA.

I counted 48 individually placed signs neatly spaced along the east side of the Trail, just south of where it
intersects with the western end of the Powerline Trail.  44 of the signs were photographs of named individuals,
sometimes shown with members of their families and often mentioning a few details of their lives and the recent
year in which they were killed. 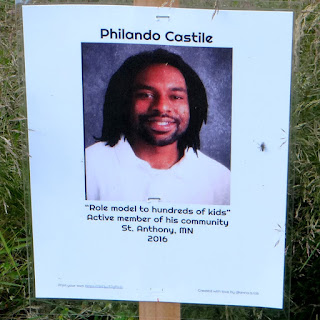 For me personally, seeing photos of these folks at positive times in their lives had a strong emotional impact,
to realize that they were all now dead.

There was a fair amount of traffic along the Trail during the time I was there, as it had become quite sunny.
A few were obviously quite interested, although the majority did not particularly pay much attention.  I watched one woman walk along the display with her cell phone held in such a way as to indicate she was recording what
she saw.

I visited the site again on Sunday, and discovered that all of the signs had been taken down.

Wow. What a beautiful, nonviolent and moving memorial. What a great way to make a statement and catalyze change.

How unfortunate that someone took it upon themselves to remove them. How selfish.