The following, was presented to city officials by Redmond's Mayor Emeritus Rosemarie Ives, on January 3, 2012 during "Items from the Audience"

Good evening Mayor and Redmond City Councilmembers. My name is Rosemarie Ives. I am here tonight as a resident to ask for reconsideration of the council’s decision on December 13th regarding the Group Health Master Plan and Development Agreement.

As the former mayor, I know that this forested property matters to the people of Redmond and those of us who are here tonight object to the clear-cutting of this iconic site. I believe that the criteria for exception to the tree preservation/retention regulations have been misapplied and not justified.  Read More >>

I believe that with reconsideration, some additional time can be devoted to the outstanding issues that I will speak to this evening. Although there are more issues, I will speak briefly on five because each should raise questions in your minds. The public deserves your further investigation of the answers. I recommend that the council ask that the development agreement not be signed and deferred to a later time when these issues have been resolved so as to protect the city from unforeseen financial consequences.

The notice of this proposal to the public was deficient in several ways. Press releases and other information from the city, other than going on line to read the master plan, were very general in their description of what was being proposed. I read the press release sent out after the council’s September 27 meeting and there was no mention that over 1000 trees were being cut down.

The public who might have received the weekly Redmond Reporter in their driveway in mid December might have read about the trees. The City of Bellevue that for decades has been involved with the City of Redmond on common planning issues especially transportation planning in the Overlake area has not been formally contacted about this project.

Although the initial public hearing on this proposal in mid October was advertised in The Seattle Times, the continuation of the public hearing to December 6 and onto December 13 was not. So there has not been sufficient time to research exactly what was or was not entailed in community outreach. The public information and outreach has not been enough!

Except for Councilmember Kim Allen, councilmembers who voted for the proposal mentioned Growth Management as the reason for their support. Since the enactment of GMA, Redmond has been a leader in accommodating both job growth and housing. In fact as a result of the desire for job growth to continue in the 1990’s and beyond, the city up-zoned the North Education Hill Neighborhood, Downtown Redmond, and the Overlake Neighborhood to make sure there was sufficient capacity for housing. Today Redmond’s statistics are approximately 55,000 residents and 80,000 jobs.

As of the 2007 update of the Overlake Neighborhood Plan, there is capacity for an additional 41 new buildings (26-6 story, 8-8story,7-9story). A graphic created in 2007 by Redmond staff was shown on the overhead. As a result of the 2007 update, Group Health had 2 million square feet of development with the trees. With this 2011 proposal, Group Health’s capacity has increased by 50% to 3 million square feet of development without 1133 trees.

There is nothing in GMA that requires a community to clear-cut any site nor is there anything that requires the city to abandon more than 20 years of adopted preservation and retention policies. In fact, GMA’s policies encourage open space. Saving trees can be very consistent with smart growth. Trees are not in conflict with urban centers.

An impact analysis of clearing significant and landmark trees from the Group Health site was never presented in any of the SEPA documents for the Overlake area. Neither vegetation nor wildlife elements were analyzed in either the May 1999 EIS or August 2007 SEIS and therefore never included any analysis of impacts of tree removal, either within the Overlake Neighborhood or more specifically the Group Health Master Plan area. I believe that the authors assumed that the long adopted tree preservation regulations and that had been implemented extensively throughout the city were in place and would continue to be so.

The November 2011 Environmental Checklist for the Group Health Master Plan and Development Agreement included a general response by the Proponent (Group Health) to part 4. Plants of the Checklist, b. What kind and amount of vegetation will be removed or altered ? The Proponent did not answer the question or disclose the impacts of the proposal – the removal of 1133 trees or the impacts to associated wildlife. Furthermore, no information was provided in the Supplemental Sheets for Non-Project Actions regarding how the proposal would affect plants and animals, and what measures are proposed to protect or conserve plants and animals.

The City of Redmond’s November 2011 Addendum to the Final Supplemental EIS stated: “An addendum is appropriate when a proposal has been modified, but the changes would not result in any new significant adverse impacts…No significant adverse impacts are anticipated as a result of this proposal.” Such is not the case for the proposed GH Overlake Master Plan. The SEPA analysis for the process has proved to be deficient and should be reanalyzed to meet the legal requirements. This is a serious omission.

Tree Retention/Preservation policies have been in place as adopted policy for at least 20 years. Additional policies regarding Sustainability and Global Warming have been more recently adopted over the past eight years. Cutting 65 landmark trees and significant stands of trees is not sustainable.

Trees have contributed extensively to the character of Redmond. The Group Health site has been a significant environmental asset in Overlake’s sea of asphalt. The trees and forests at Group Health are what is extraordinary in Overlake.

As a result of these policies, the developments are recognized beyond the city’s borders as quality environments which have resulted in greater prosperity for the property owners and the city….and the experience of all who frequent those properties is more productive and beneficial. Businesses and residents have been attracted to Redmond for its natural environment, especially the trees and forests that have been preserved in perpetuity because of the city’s forward thinking and preservation requirements and regulations.

I am tremendously concerned about this decision being precedent-setting. Did councilmembers read the Technical Report regarding N.OV58 regarding the preservation of stands of trees. Staff wrote that “tree preservation was not a goal.” What about adopted policy ? I do not believe that the council gave any policy direction early on to staff that the tree exception for total clear-cutting should be advanced to and promoted with the applicant which is unfortunate for the applicant. So from this point on, does anyone who has land with a tree or trees now free to cut down all the trees ? Am very concerned about the implications of this action for future development and for the overall quality of life in Redmond.

There is no way that new trees and bushes can accrue equal benefit as the existing trees and shrubs. This is a simple math equation…or simple economics – how long will it take for the new one gallon trees and plants to make up the ecological value of the present trees ? Never and certainly not enough!

Two overheads were shown that come from an on-line tree calculator that provides annual benefits in actual dollars. A 34” diameter Douglas fir tree provides benefits of $146 every year while a 1” diameter Douglas fir (one gallon size proposed in mitigation plan) provides $1 . Benefit goes mostly to stormwater with small amounts going to air quality and CO2. The numbers speak for themselves!
In addition I have some concerns about the impact of the mitigation plan on existing city resources.

In conclusion, there are outstanding issues with regard to these five areas that have not been explained or revealed to both the council and the public. There is no reason for a collision course here. There can be a wonderful relationship between the natural and built environments. These trees, especially the northwest corner of the Group Health site is THE signature community open space in Overlake.

I believe that reconsideration will provide additional time so the Group Health site can be developed in a responsible manner that upholds long-adopted and extensively implemented city policies, honors and advances the environmental ethic and values of our community and provides Group Health with significant benefit.

Thank you for your attention.

Photo:  The photo of  "Group Health Cooperative" is from Google Images.  The caption:  Redmond City associate planner, Dennis Lisk (425-556-2471) refers to the amended, and approved ordinance.

Notes:
Ordinance and Resolution: of the Group Health Overlake Master Planned Development, December 6, 2011.  After Council's 6-1 (Allen) decision to approve on 12/13, this ordinance was amended in Section 8.1.4 to include:  "the city shall consider retention of existing significant and landmark trees where feasible and consistent with good park design and public safety."  The city made no commitment to seek retention of trees in the future park or on the site plan developments.


According to Wikipedia the link to Rosemarie Ives is a stub and needs additional citations for verification.  Rosemarie published this piece the week (1/6/12) the Redmond Reporter published: "Council sticks to decision on Overlake Plan - Concerned citizens want leaders to reconsider tree removal..." and  "Doreen Marchione named Kirkland deputy mayor."   B.Y.
at 1/09/2012

Thank you Mayor Ives for speaking out on this issue. We so easily cut down trees without consideration to the loss and implications.

Let's be completely honest here...the council and City officers don't care what the citizens think; they are only concerned with city income so they can increase their salaries and their reputations.

If a resident (i.e. citizen) of Redmond wanted to cut down a tree, a permit would have to be issued and an arborist would have to verify that the the "heritage" trees were damaged before cutting them down. The city follows these laws at the barest minimum of necessity; and finds endless ways around the details to justify their means.

For the purposes of clarification, Redmond City Code only considers a tree a plant with a trunk 6" or larger at chest height. There are likely many more trees under this classification that will be cut down; clearing the way for more buildings that will stand unoccupied.

We will soon have to rename our "Evergreen State" to "Asphalt State".

Do you know Redmond Town Center will be enhanced in the next few years?  The plan is to transform the current Center into a true mixed-use... 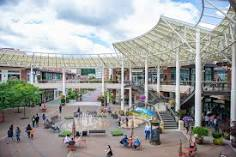